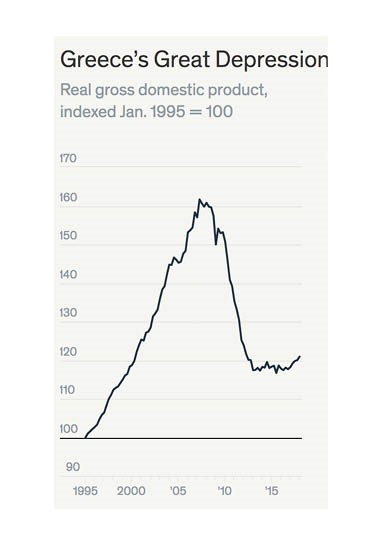 We should probably all be celebrating the news that, after eight years of headlines predicting the worst sort of gloom and doom, the nation of Greece has emerged from its bailout program.  Over that time period, the country received 289 billion euros ($330 billion) from the International Monetary Fund, the European Union and the European Central Bank.  Greece can now borrow at market rates again.

Which means the crisis is over, right?  Actually, for the average citizen, the crisis is ongoing and getting worse.  True, Greek unemployment has fallen from a catastrophic 28% at the peak to a hair-raising 19.5% today, but that may be because 400,000 Greeks have emigrated, perhaps never to return.  True, the country has shown a small increase in GDP over the past 12 months.  But the Greek economy is now 25% smaller than it was when the crisis began.  Meanwhile, its aggregate debt burden (banks and government debt) has actually increased, and now stands at 322 billion euros ($366 billion)—or 181% of the country’s total economic output.  The best case forecasts have Greece’s debt-to-GDP ratio falling to “just” 100% by 2060. 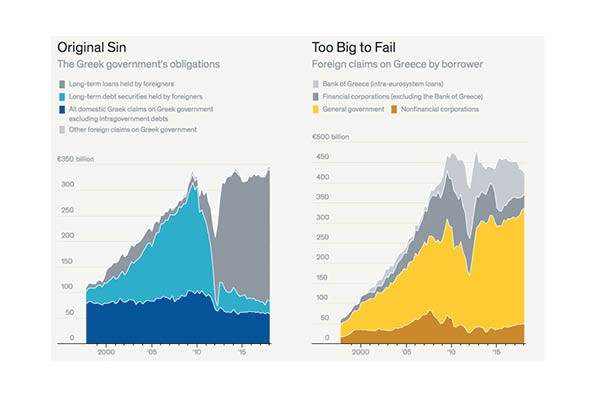 How is it possible that the bailouts provided so little cover to the beleaguered nation?  The problem was that the bailouts were not really designed to help the Greek economy, but instead were made to make sure that the (primarily German) bank lenders would be paid back as close to “in full” as possible.  More than 70% of the “rescue” loans actually went directly to the lenders in the form of principal repayment, interest payments and incentive payments to foreign bondholders.  All of the loans came with strict conditions that the country raise taxes and cut spending, sending the Greek economy tumbling headlong into depression.

Maybe we should cheer the fact that the scary headlines and talk of a “Grexit” are finally over.  But we should also realize what happens when a nation gets itself into debt too far over its head—and consider the cautionary tale of how the world treats a debtor nation that owes too much and saved too little.