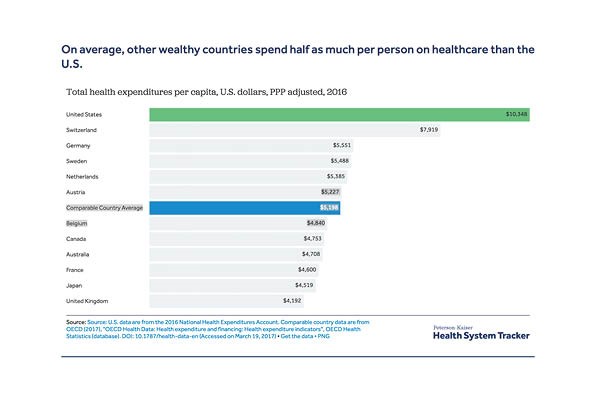 In all the debate over how or whether we need affordable care, state registries, guaranteed coverage despite pre-existing conditions etc. etc., few Americans realize that our U.S. healthcare system has been totally out of control, cost-wise, for decades.  A recent study by the Kaiser Foundation found that virtually every developed nation has some form of universal healthcare, and their citizens pay much lower prices for healthcare, overall and for individual procedures and drugs.  It found that the average American spends more than $10,000 a year for health expenditures, by far the highest in the world, which comes to fully 18% of total GDP.  The average citizen of the average developed nation spends roughly $5,000 a year for similar care—half what we do in the U.S.  (see chart)

But that probably means that other citizens have less access to healthcare.  Right?  Wrong.  Despite paying more, the average American has fewer physician consultations—about 3.9 per person per year, well below the 7.6 average for other countries, far behind the 12.7 visits per Japanese citizen.  (see chart)  The researchers also note that Americans have a shorter average stay in hospitals—6.1 days vs. 10.2 days on average for other developed nations.

Delving into specific procedures, the Kaiser study found that Americans pay more for angioplasty and coronary bypass surgery, MRI exams, colonoscopies, appendectomies and knee replacement surgeries.  In fact, the cost of a knee replacement in the U.S. ($28,184 on average) is nearly twice the cost of a similar procedure in Australia ($15,941).  A variety of expensive drugs are much costlier to American patients than to people living abroad.

The study doesn’t offer any prescriptive recommendations; nor does it show whether the passage of the Affordable Care Act helped or hurt America’s standing as the highest cost health provider.  It doesn’t actually draw any conclusions at all, simply presenting data for us to think about.  What the data seems to be saying is that our healthcare system has been broken for quite some time, and that other countries seem to have found better ways to keep their costs under control without compromising access to healthcare professionals. 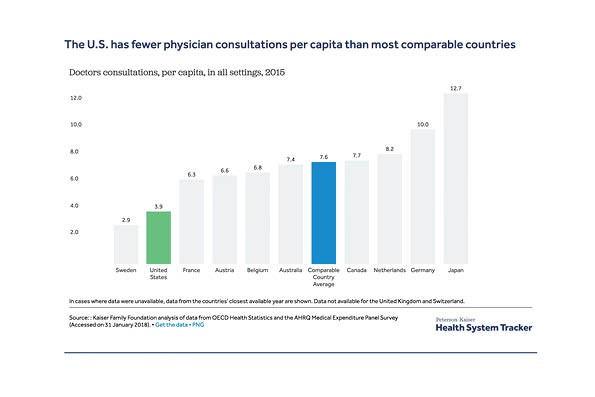