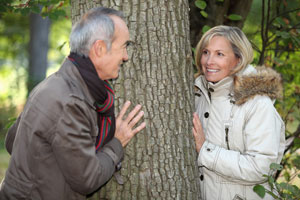 About a third of all adults over the age of 85 will get Alzheimer’s disease or some other form of dementia, but these maladies may be more preventable than most of us realize.  Doctors have known that older adults who use their brains more actively are less likely to fall victim to dementia, while less active adults experience cognitive decline more often.  A new study has added two more factors which may contribute to higher incidences of dementia.

The study followed more 3,247 adults for more than 25 years, testing them regularly for cognitive health, and gaining information every couple of years on their lifestyles.  It turns out that people with the highest levels of television viewing—those who watched an average of more than three hours of TV a day—had had 64% greater odds of scoring poorly on the cognitive tests compared to those who spent the least amount of time on the couch with the remote in their hands.  When the lifestyle consisted of a lot of TV face-time and low physical activity, the researchers found that the odds of performing poorly on the cognitive tests was twice as high as those who were more active and didn’t watch much TV.

The good news from this rather discouraging research is that people who spent their younger years binge-watching can, at a later age, mitigate the damage by becoming more socially active, by exercising more and otherwise stimulating their brains.  The speculation on TV watching is that TV is a passive medium that simply engages the brain without challenging or stimulating it.  People who get up and walk, use their computer in a cognitively challenging way, learn a new language or musical instrument, play board games and/or engage in a cause or spiritual practice they care about can build up what researchers call a “cognitive reserve,” extra brain power that is associated with better cognitive aging.
Sources: