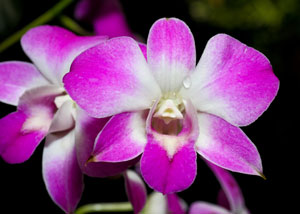 Do plants respond to your touch? Do they feel or enjoy music or your singing voice?

The answers, according to new research conducted at the University of Western Australia, are yes and no. Lead researcher Olivier Van Aken says that plants rapidly respond when you pinch a flower, step on them or just brush by them while walking.

Although plants don’t possess a brain in the ordinary sense, they appear to stay aware of their surroundings and circumstances at the genetic level. In one study, spraying water droplets on plans caused them to change the way thousands of genes were expressed within minutes of the stimulus. The reaction stopped within half an hour. Another study showed that gently touching or patting the leaves and stems of plants elicited the same reaction.

But when the researchers played music or sang to the plants, there appeared to be no genetic response. If you want to sing for your plants, recognize that they’re probably not paying attention.
Source: