How Should We Think About the Future? 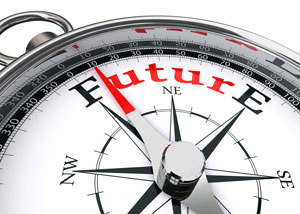 Chances are, you’re underestimating the amount of progress we’re going to make in technology, medicine and a host of other things.  Why?  Because your brain, and mine, and everyone else’s, thinks linearly, rather than exponentially.  We are living in an age of exponential change in things like computing power and speed, decoding and finding medical uses for the human genome, adoption of the Internet mobile technology and various social media sites, self-driving cars and many other things that were not even on your radar ten years ago.

According to an article at Singularity Hub, our brains are wired to predict the future based on the past.  If we’re walking down a road, and taking steps a meter in length, we assume that it will take 30 steps to travel 30 meters.  This progress is relatively easy to predict, and this linear thinking would have worked pretty well for evaluating the growth of our economy and its various technologies until fairly recently.

But now think about exponential growth, where each step we take is twice as long as the previous one.  Our first step is a meter, the next one is two, and by step number 30, you will have traveled a billion meters—a distance equal to 26 trips around the Equator.  This kind of rapid change is very difficult for our minds to wrap themselves around, but it accurately describes the evolution of many of the technologies and medical services that we enjoy today.

One of the hardest things to adjust to, the article tells us, is how things seem to appear out of nowhere.  Think: mobile device apps, or the iPhone itself, or the exponential growth of information available on the Internet.  That’s because exponential growth seems to happen overnight.  When you double the length of each of those steps, you’re traveling 125 million miles at step 28, which is as much as all of the previous steps combined.  Your next step is 250 million miles, again as much as all previous steps, and then you step 500 million miles, and you have traveled a full billion.  If this were technology, those last two steps may see the advent of something completely unexpected and far beyond whatever came before.

Individuals and companies can’t predict exactly what will happen.  But we can prepare for a future that moves so quickly that it seems out of control, and know that it’s actually the result of steady progress where a lot of previous steps built on each other invisibly but exponentially.  We can allow ourselves to be pleasantly surprised by what the world brings us in the next ten or 20 years in the form of new therapies, new conveniences and access to more and better information—because changes are coming faster than our humble minds can predict, whether we decide to adjust to them or not.

How to Think Exponentially and Better Predict the Future