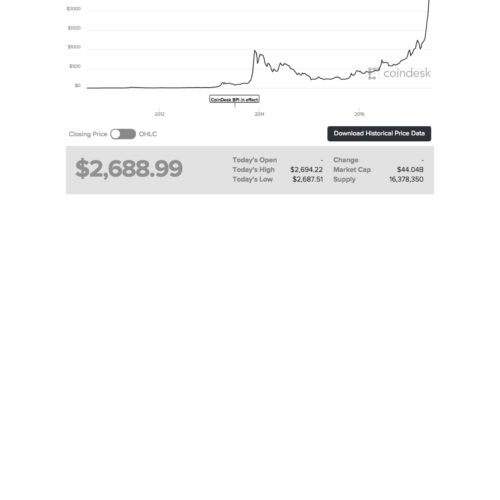 One candidate for the greatest bull market run in financial history is the recent runup in price of the Bitcoin—the crypto-currency favored by international arms dealers and drug cartels, but also gaining acceptance at some retail locations. The so-called “internet of money” is not backed by any government, which its promoters say is a good thing, because the currency is not subject to QEs or over-caffeinated printing presses in Washington, Brussels or Tokyo.

Of course, these are not actually coins; the currency exists in “wallets” that are tracked through a global system that updates everyone’s holdings; your “wallet” is on your computer, and sophisticated computers can “mine” new “coins” by solving complex algorithms that also help keep the money tracked. In the early days, there were lurid stories of peoples’ wallets getting hacked, but the crypto-processing seems to be safer now.

As recently as 2011, you could have bought any number of bitcoins for practically $0. In fact, seven years ago, a programmer spent 10,000 bitcoins to purchase two Papa John’s pizzas. Today, a single “coin” is selling for $2,690.14, no doubt causing the programmer to wish that he’d held onto his coins for a few more years. But as you can see on the chart, the ride for bitcoin holders has been bumpy, and much of the price runup has been recent. If you’ve ever experienced a market bubble, you know this is what they look like.

But why would the price ever drop? For one thing, the Bitcoin currency now has crypocurrency rivals, among them a similar technology and market system called Ethereum. For the first time, Bitcoins actually make up less than 50% of the crypto-marketplace. For another, costs per transaction—which are supposed to be zero—have risen to an average of $4.75, and it sometimes takes a month for the transaction to settle.

Beyond that, there’s a long-running dispute between the developers of Bitcoin who process transactions and the “miners” who create the coins, which doesn’t look likely to be settled any time soon. It’s been speculated that Bitcoin will split into two factions, which users will have to choose between. A possible glimpse into the future happened when a new startup called Coinbase was touted as the marketplace that would finally bring Bitcoin to the mainstream. Coinbase was backed by the New York Stock Exchange. After considering its options, Coinbase decided to create a new currency alternative to Bitcoin, called Token—which will be built on Ethereum technology.

The conclusion: This is not a bandwagon you want to jump on at current prices.