Who Pays for College? Are They Getting Their Money’s Worth? 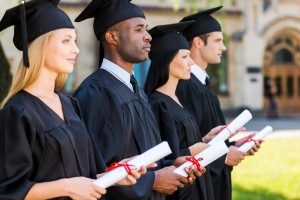 According to the Student Loan Marketing Association (more commonly known as Sallie Mae Bank), the average tuition, room and board at a private college comes to $43,921. Public tuition for in-state students at state colleges amounted to $19,548, with out-of-state students paying an average of $34,031.

How are parents and students finding the cash to afford this expense?

Sallie Mae breaks it down as follows: 34% from scholarships and grants that don’t have to be paid back, coming from the college itself or the state or federal government, often based on need and academic performance.

Parents typically pay 29% of the total bill (an average of $7,000) out of savings or income, and other family members (think: grandparents) are paying another 5%.

The students themselves are paying for 12% of the cost, on average.

The rest, roughly 20% of the total, is made up of loans. The federal government’s low-interest loan program offers up to $5,500 a year for freshmen, $6.500 during the sophomore year, and $7,500 for the junior and senior years. If that doesn’t cover the remaining cost, then students and parents will borrow from private lenders. The average breakdown is students borrowing 13% of their total tuition costs and parents borrowing the other 7%.

Yes, there are some themes here, and of course people in every career can fall above or below these averages. Nor does everybody who graduates with a particular degree end up in a career that tracks that degree. (Of particular note: the list does not include a financial planning or investment advisory degree.) The point is that despite the cost, a college degree does seem to provide significantly better odds of getting a job, and getting paid more for the job you do get.

PrevPreviousHow to Save in a Hurry
NextDoes Wealth Equate to Quality of Life?Next
Facebook
Twitter
LinkedIn
Email