Does Wealth Equate to Quality of Life? 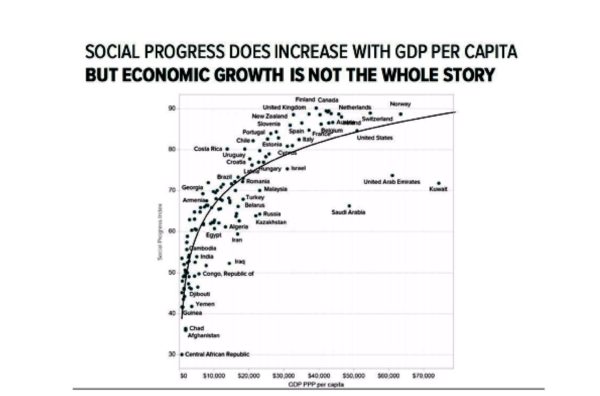 If you want to see a fascinating chart, take a look at this graphic which charts each country’s GDP per capita with its “social progress,” defined by a cumulative measure of economic opportunity, access to quality healthcare and education, tolerance of minorities and general quality of life. This is a subjective measure, but if you look at the countries toward the bottom of the chart, you’ll see that the Social Progress Index mostly gets it right.

What’s interesting is the correlation between economic wealth and social progress. Interestingly, the article describing this chart (see below) from the U.K. Business Insider focuses on the fact that some countries (like Finland, Canada, New Zealand and the Netherlands) are enjoying more social progress with less wealth, while others (United Arab Emirates, Kuwait, Saudi Arabia) have more wealth and less social progress.

But if you look at the line that curves through the data, and especially if you imagine that the line were curved a bit higher on the top end, you see that the correlation between the two is pretty close. The other interesting thing is how the United States, while high on the scale, ranks behind at least a dozen other countries on the Social Progress Index. Is it really less pleasant to live in the U.S. than Slovenia?

Culture clearly plays a part in the rankings, which tells us that wealth isn’t everything. The Scandinavian countries, Canada, New Zealand and Australia clearly put more emphasis on quality of life than on per-capita wealth, while many Arab nations plus Russia have relatively high incomes but fall below the Social Progress curve.

PrevPreviousWho Pays for College? Are They Getting Their Money’s Worth?
NextThe Precedent to BrexitNext
Facebook
Twitter
LinkedIn
Email