You probably know that when you look at a compass needle, it doesn’t point exactly to 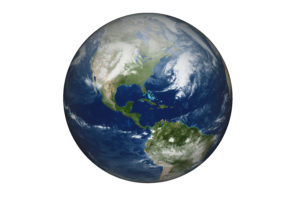 the place at the very top of the world, called North Pole. The magnetized needle, instead,
is attracted to the MAGNETIC North Pole, which is in a different location.

In fact, the Earth’s Magnetic North Pole is in a different location today than it was
yesterday; it has been moving around rather dramatically since the first measurements
were taken in 1831. Today, it’s located in the Arctic Ocean, closer to the actual North
Pole than at any time in the past 150 years, moving about 130 meters a day. It has shifted
from northern Canada in 1831 to, today, just past the North Pole slightly in the direction
of Alaska, moving steadily over the top of the world toward Siberia.

The accompanying map, where we look down at the Earth from above the true North
Pole, shows the migrating location of the Magnetic North Pole since 1831, and you can
see from the red dots and the dates that the rate of its travels has accelerated in recent years.

Why is the Earth’s magnetic field shifting faster today than in the past? What determines
the direction it’s moving? Nobody seems to know. But the consensus is that it will
continue protecting us from harmful cosmic rays during its unpredictable shifts. And
our compasses are still pointing in the right general direction.