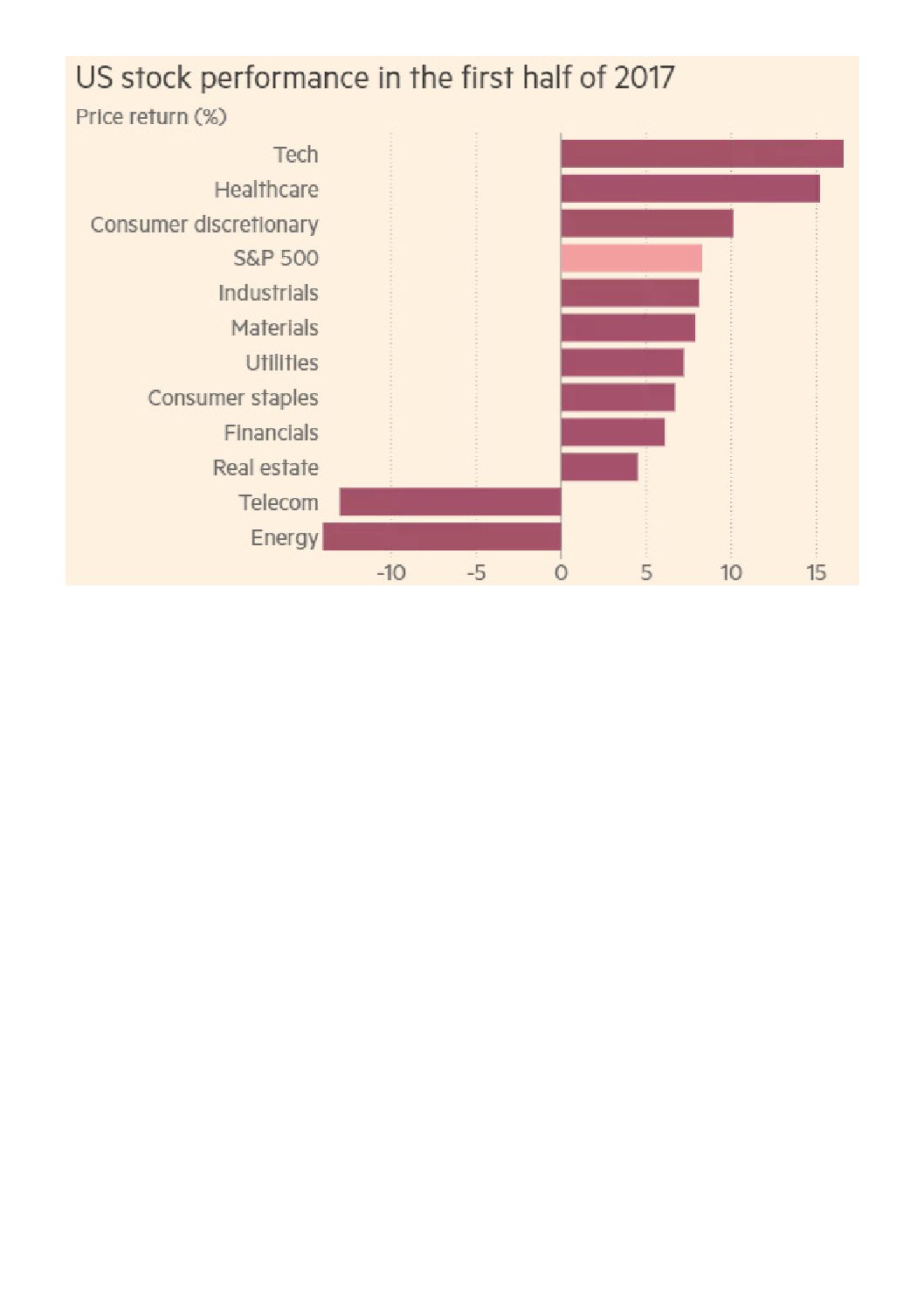 The U.S. stock market has more than tripled in value during the runup that started in March 2009, and the most recent quarter somehow managed to accelerate the upward trend. We have just experienced the third-best first half, in terms of U.S. market returns, of the 2000s.

Meanwhile, the Russell Midcap Index gained 7.99% in the first two quarters of the year.

As measured by the Wilshire U.S. Small-Cap index, investors in smaller companies posted a relatively modest 1.65% gain over the second three months of the year, to stand at a 3.95% return for 2017 so far. The comparable Russell 2000 Small-Cap Index finished the first half of the year up 4.99%, while the technology-heavy Nasdaq Composite Index broke the 6,000 barrier in April, rose 4.18% for the quarter and is up 14.14% in the first half of the year.

International investments are finally delivering returns to our portfolios. The broad-based EAFE index of companies in developed foreign economies gained 5.03% in the recent quarter, and is now up 11.83% for the first half of calendar 2017. In aggregate, European stocks have gone up 14.49% so far this year, while EAFE’s Far East Index has gained 10.45%. Emerging market stocks of less developed countries, as represented by the EAFE EM index, rose 5.47% in the second quarter, giving these very small components of most investment portfolios a remarkable 17.22% gain for the year so far.

Looking over the other investment categories, real estate, as measured by the Wilshire U.S. REIT index, gained 1.78% gain during the year’s second quarter, posting a meager 1.82% rise for the year so far. The S&P GSCI index, which measures commodities returns, lost 7.25% for the quarter and is now down 11.94% for the year, in part due to a 20.43% drop in the S&P petroleum index. Gold prices are up 7.69% for the year, and silver has gained 3.28%.

In the bond markets, longer-term Treasury rates haven’t budged, despite what you might have heard about the Fed tightening efforts. Coupon rates on 10-year Treasury bond rates have dropped a bit to stand at 2.30% a year, while 30-year government bond yields have dropped in the last three months from 3.01% to 2.83%.

By any measure, this represents a strong first half of the year, driven (as you can see by the graph) by the S&P 500 tech sector, biotech firms and information technology companies generally. What is interesting is that investors appear to be flooding into these business categories because they are the ones most likely to grow their sales even if the economic environment were to turn sour—which suggests a growing bedrock of pessimism about future economic growth among seasoned investors.

Is that justified? Economic growth was admittedly meager in the first quarter—U.S. GDP grew just 1.4% from the beginning of January to the end of March, a figure that was actually revised upwards from initial estimates of 0.7%. That represents a slowdown from the 2.1% growth in the fourth quarter of last year, when the country was being managed by a different Presidential Administration. It might be helpful to note that the budget proposals floating around Washington, D.C. make the optimistic assumption of an economic growth rate of 3.0%. If the economy fails to achieve that rate, then watch out for a significant rise in the federal deficit.

There is room for hope. The Atlanta Federal Reserve recently forecasted that the U.S. economy will grow at a 2.9% rate for the year’s third quarter. We won’t have definitive evidence of that until sometime in October, but our fingers are crossed. More good news: the unemployment rate is at a near-record low of 4.7%, and wages grew at a 2.9% rate in December, the best increase since 2009. The underemployment rate, which combines the unemployment rate with part-time workers who would like to work full-time, has fallen to 9.2%–the lowest rate since 2008.

Meanwhile, the energy sector, which was a big winner last year, has dragged down returns in 2017. This proves once again the value of diversification; just when you start to question the value of holding a certain investment, or wonder why the entire portfolio isn’t crowded into one that is outperforming, the tide turns and the rabbit becomes the hare and the hare becomes the rabbit. If only this were predictable.

There are many uncertainties to watch in the days ahead. The U.S. Congress is still debating a health care package, and has promised to revise our corporate and individual tax codes later this year. There’s an infrastructure package somewhere on the horizon, and perhaps a round or two of tariffs on imported goods. Inflation often follows when the Fed raises rates, but we don’t know if or when the Fed will do that, or by how much.

Meanwhile, the current the bull market is aging, and as you can see from the accompanying chart, the runup has lasted for longer than anybody would have expected when we came out of the gloomy period after the 2008 crisis. Inevitably, we are moving ever closer to a period when stock prices will go down. That day cannot be predicted in advance, but it is always good to spend a moment and ponder how much of a downturn you would be comfortable with when markets finally turn against us. If your answer is less than 20%, or close to that figure (which is the definition of a bear market), this might be a good time to revisit your stock and bond allocations.

On the other hand, if you’re not fearful of a downturn, then the next bear market will be a terrific buying opportunity for all of us.