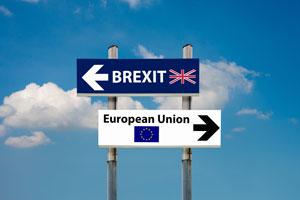 Apparently nothing more than a careful process designed to minimize damage on both sides of the English Channel.  British Prime Minister Theresa May recently announced a target of late first quarter 2017 as the time she and Parliament will finally pull the trigger and invoke Article 50 of the EU’s Lisbon Treaty.

When that happens, it will, by contract, start two years of negotiations on exactly what the economic relationship between Britain and mainland Europe will become.  At the same time, however, May says she plans to introduce “Great Repeal” legislation next year that will convert all existing EU laws into U.K. legislation.  Parliament will also have to repeal the European Communities Act of 1972.

But will there actually BE a Brexit?  A group of over 1,000 British barristers have signed a letter pointing out that the Brexit referendum was nonbinding, and that the prime minister cannot make such a significant decision without consulting Parliament.  It’s possible that until Parliament affirms the extrication from the European Union, it won’t legally take place.  London’s High Court is expected to issue a ruling on Parliament’s role in Brexit on October 13, but an appeal is expected no matter what the ruling—sending the case to the U.K. Supreme Court to be heard in mid-December.

It may be helpful to remember that May herself advocated remaining in the European Union prior to assuming her current leadership position.  There is speculation that her uncompromising timeline on Brexit is simply a way to reassure voters that she has heard their message.  Then she can work for a so-called “soft Brexit,” where the country will control its borders via liberal work quotas, and there will be little changed in terms of trade and finance.

Meanwhile, despite the dire predictions, there has been no British recession as a result of the unexpected vote, and little has changed in regard to London’s status as Europe’s leading financial center.