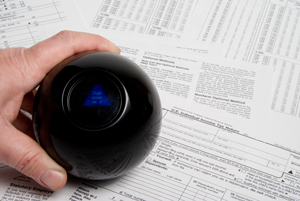 If you want to look like a brilliant stock market analyst, keep predicting the same thing over and over again until it finally happens.

A great example of this marketing strategy is newsletter publisher Marc Faber, whose website modestly describes him as “an international investor known for his uncanny predictions of the stock market and futures markets around the world.”  He is also, in some circles, known as “Dr. Doom.”

On January 1 of this year, Faber predicted a weakening U.S. economy, and said that he expected U.S. stocks to fall in 2016.  Uncanny, right?  Except that in August of 2013, Faber was telling MarketWatch essentially the same thing, predicting a 1987-like stock market meltdown that could see the S&P 500 fall more than 20%.  (The index ended that year up 32.4%.)

This is yet more evidence that we should tune out anyone who claims to have predicted the future with accuracy—as if we need another reason to ignore gypsies with crystal balls, soothsayers wearing wizard hats, palm readers and stock market pundits with sketchy track records.  Alas, these people tend to come out of the woodwork whenever markets go down, and they prey on our desire to know when the pain will be over.  They also tend to get more attention from the press than more honest analysts who refuse to play the prediction game and openly tell us they don’t know what will happen next.  The folks who have been predicting a market crash year after year deserve no credit for finally stumbling on an accurate forecast.