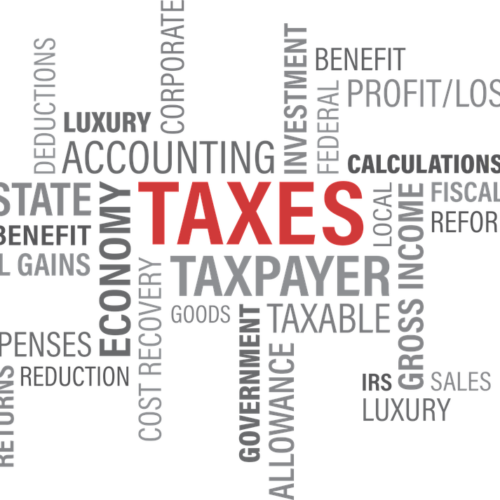 The new tax law hasn’t been formally ratified by the U.S. House and Senate, but all indications are that the Tax Cuts and Jobs Act of 2017 will be sent to the President’s desk in the next few days. As you probably know, the House and Senate versions were somewhat different. What does the new bill look like?

Despite the promise of tax “reform” or “simplification,” the bill actually adds hundreds of pages to our tax laws. And the initial idea of reducing the number of tax brackets was apparently tossed aside in the final version; the new bill maintains seven different tax rates: 10%, 12%, 22%, 24%, 32%, 35% and 37%. Most people will see their bracket go down by one to four percentage points, with the higher reductions going to people with higher income. And the tax brackets, going forward, will be indexed to inflation, meaning that the “real” income brackets will remain approximately the same from year to year.

Taxes for trusts and estates were also changed to:

Notice that in the lower brackets, the joint return (mostly for married couples) were double the individual bracket thresholds, eliminating the so-called “marriage penalty.” However in the higher brackets, the 35% rate extends to individuals up to $500,000, but married couples with $600,000 in income fall into that bracket. In the top bracket, the marriage penalty is more significant; individuals fall into it at $500,000, while couples are paying at a 37% rate at $600,000 of adjusted gross income.

The bill calls for no personal exemptions for 2018. And the Pease limitation, a gradual phaseout of itemized deductions as taxpayers reached higher income brackets, has been eliminated.

Despite the hopes of many taxpayers, the dreaded alternative minimum tax (AMT), remains in the bill. The individual exemption amount is $70,300; for joint filers it’s $109,400. But for the first time, the AMT exemption amounts will be indexed to inflation.

In addition, the rules governing Roth conversion recharactsrizations will be repealed. Under the old law, if a person converted from a traditional IRA to a Roth IRA, and the account lost value over the next year and a half, they could simply undo (recharacterize) the transaction, no harm no foul. Under the new rules, recharactization would no longer be allowed.

For many taxpayers who itemize deductions, the adjusted gross income number will be higher under the new tax plan, because many itemized deductions have been reduced or eliminated. Among them: there will be a $10,000 limit on how much any individual can deduct for state and local income tax and property tax payments. Before you rush to write a check to the state or your local government, know that a provision in the bill states that any 2018 state income taxes paid by the end of 2017 are not deductible in 2017, and instead will be treated as having been paid at the end of calendar year 2018.

The mortgage deduction will be limited to $750,000 of principal (down from a current $1 million limit); any mortgage payments on amounts above that limit will not be deductible. However, the charitable contribution deduction limit will rise from 50% of a person’s adjusted gross income to 60% under the new bill.

What about estate taxes? The bill doubles the estate tax exemption from, currently, $5.6 million (projected 2018) to $11.2 million; $22.4 million for couples. Meanwhile, Congress maintained the step-up in basis, which means that people who inherit low-basis stock will see the embedded capital gains go away upon receipt.

And pass-through entities like partnerships, S corporations, limited liability companies and sole proprietorships will receive a 20% deduction on taxes for “qualified business income,” which explicitly does NOT include wages or investment income.

As things stand today, all of these provisions are due to “sunset” after the year 2025, at which point the entire tax regime will revert to what we have now.