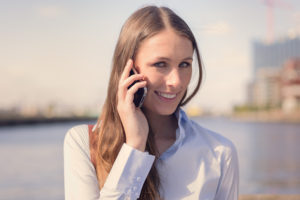 Have you ever wondered how often the average person interacts with his or her mobile device?  As it turns out, the mobile research firm Dscout, Inc. has the answer.  According to its statistics, the average person taps, pokes, pinches or swipes his/her personal phone an astonishing 2,617 times a day.  It adds up to about 2 hours and 25 minutes of interaction a day.

According to a 2016 survey of more than 2,000 executives and human resource managers, conducted by HR software and services firm CareerBuilder, smartphone use is now the leading productivity killer in the workplace.  A later study, by the University of Texas and the University of California, found that even when workers had their phones placed on their desks—untouched—their cognitive performance was lower than when their devices were in their pocket or handbag.  Mobile devices are both distracting and addictive.

If you’re curious whether you are above or below the average, there’s now an app called Moment that can be downloaded onto iPhones, where it will track the total daily amount of time you spend on your phone.  One product manager has asked his staff to use the app and post their daily hours on a whiteboard at the office.  The team member with the lowest time gets bragging rights.  (The next version of the Android phone operating system will include a feature that will let users see how much time they spend on their phones, which apps they use the most and display how often the phone gets unlocked.)

A growing number of corporate managers have banned smartphone devices altogether at their staff meetings—but they say they’ve received hard pushback from their workers, and by and large the bans have been ineffective.  Staffers simply wear smart watches or bring a laptop, which can be just as distracting from those Excel spreadsheet slides in the Powerpoint presentation the office manager is delivering.