A Kent State grad, Katy Smith, the most recent editor of the information-packed ColumbusCEO magazine is in our spotlight this week for our weekly live broadcast. Starting early, Katy outset her career working at the Columbus Dispatch, covering state and government legislature and carried herself to multiple other publications later on. For almost a year, Katy was in charge of Marketing at COTA, the Central Ohio Transit Authority. Her robust experience in Central Ohio gave her just the opportunity to run the ColumbusCEO Magazine.

The magazine focuses on multiple industries, including nonprofits. Katy has a reputation for covering 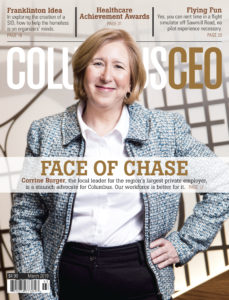 nonprofits and has won an award for her nonprofit journalism. The magazine targets current, but also newsy stories, to be apart of “what people are talking about” and looks ahead for the business community. Katy mentions her recent March publication, headlining “Face Of Chase”, highlighting Corrine Burger, the local leader of JPMorgan Chase. You can sign up to see this publication and future issues by subscribing with our button link below: