Tip: 15% of middle-aged adults are providing financial support to both an aging parent and a child.
Source: Pew Research, 2013

Regardless of what approach you intend to take, here are nine things about retirement that might surprise you.

Fast Fact: Not Much. Excluding the value of primary residences and defined benefits plans, 52% of workers stated that they had less than $10,000 in total savings and investments.
Source: Employee Benefit Research Institute, 2014

These stats and trends point to one conclusion: The 65-and-older age group is expected to become larger and have more influence in the future. Have you made arrangements for health care? Are you comfortable with your investment decisions? If you are unsure about your decisions, maybe it’s time to develop a solid strategy for the future.

22% of workers now intend to keep working until age 70 and beyond. And 7% don’t intend to retire at all. 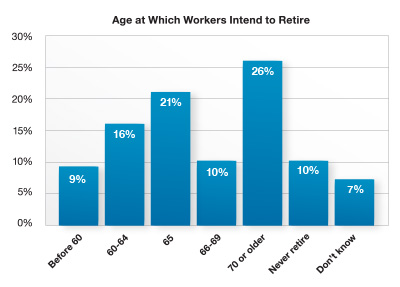